Good morning! My cards today pretty much sum up how we all feel… anxious to get together again with friends and family! Here I used the SNSS In This Together digital printable. You can also easily use the In This Together stamp set. Either one works for a quick and easy set of cards to let someone know how much you miss them. To use the digital images, I first sized and placed them how I wanted them in a Word document. Then I cut pieces of patterned paper to fit my card front. I used a temporary double-sided tape to attach the patterned paper panels to a sheet of copy paper and ran them through my printer. Then I ran another piece through to print several sentiments and layered them on with a ribbon. I hope these cards inspire you to try out some digital images or use your stamps to make some CAS cards. Have a nice Sunday! 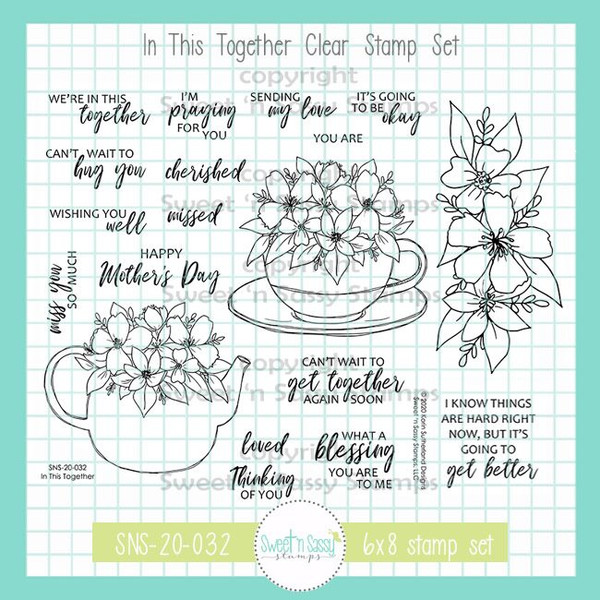 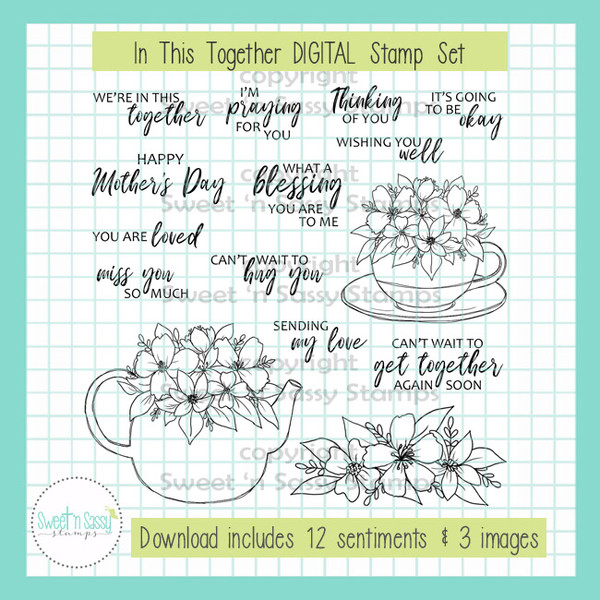 Back in the beginning of October I filled in to teach a class on making a 6×6 recipe card. Over the summer we stayed at a B&B in Amish country and were treated to some delicious breakfasts. One was some peach puff pancakes. The B&Bs in the area put out a few cookbooks and I purchased the current one. It didn’t have the peach version but this delicious apple one with craisins and pecans. We love it! I decided to use the cute apple paper but didn’t want to cover it all up so I made a triangular pocket with it to tuck the recipe inside. I stamped the Concord & 9th plaid background with black ink onto red cardstock and die cut the letters with Altenew’s Bold Alphabet. I also used a tiny apple die from my stash to cut from the plaid. To finish it off, I added the cute SNSS An Apple For Cocoa digital image and a few black enamel dots.

Hello!  Today I am sharing a card on the Sweet ‘n Sassy blog using one of my newly released Digi images.  I have to say that this is one of my favorite snowmen…mostly because he is in the company of a sweet bunny who decided to share his carrot!  A snowman must have a carrot nose, right? One great thing about digi images is that you can make them any size you want.  I wanted to make this image big and keep it simple, with the focus staying on the gift.  As I printed it out, this verse came to mind…

This was intended as a thank you card but I think it also conveys what we feel in our heart as we share God’s love.

If you are a fan of Digital images, go check them out in the SNSS store.  And if you’d rather work with stamps & ink… this is also available in the Snowy Hello stamp set!

Thanks for popping in…happy stamping!

love you more than chocolate

Hey all!  Today Sweet ‘n Sassy is releasing a bunch of new digital images in the store…including a few of my own!  If you like to work with digis, you need to check them out.

I used some sweet little digi candies and a digi sentiment by Korin on my card today. I don’t normally use digital images but I have to say this was quick & easy!  It was super simple to get all the candies lined up and spaced perfectly by adding them to a Word doc and then printing it out.  🙂

I traced over the sentiment with Copic markers to highlight it and add color.

I was recently asked how to paper piece digital images with your computer’s printer.  So I thought I’d take a few photos to help explain how it’s done.

For this card I used the July free digital images at Paper Smooches.  (There’s Crystal Effects on the cherries so they’re nice and shiny IRL). The cupcake is actually a single image but I deleted the white background and placed 3 cupcakes together using Photoshop Elements.  The middle cupcake was flipped horizontally.  I am not real experienced with PE so I had to play around a bit until I got what I wanted and honestly, I forget exactly how I did it.  LOL.  I’ll have to play some more and write it down next time!  You don’t have to do multiples, though…it would be best to start with a single image.  Keep it simple!

After I had my image the way I liked, I printed my “base” copy onto white cardstock (top of photo).  Then I printed it a second time onto plain white printer paper.  Using double sided temporary tape, I cut some scraps of designer paper and attached them over selected areas of the image on the printer paper.  This was run through the printer a second time to get the parts of the image that I wanted onto the designer paper (bottom of photo). I repeated this several times until I had all the pieces of designer paper printed with the areas I had selected (photo below).  I chose to paper piece the entire thing but you could paper piece some and color the rest. Next just cut your pieces out and glue to the “base” image.  It’s really quite easy…I hope you try it!

The layout for this card came from the Designer Drafts #4 (the middle one on the right).  And it was made for the Paper Smooches Sparks Challenge.

When I printed out Kim Hughes’ folk stars I immediately knew I wanted to place them into her Easter basket (minus the eggs, of course!) I embossed a striped layer and then also a starry layer on top of that.  A little Stickles outlines the embossed stars…just enough to add a little sparkle and finish the card off.

Thanks for peeking in.  🙂

Yesterday I had some more fun with the Paper Smooches free digital images.  What I’ve really been doing is biding my time until I decide which sets I want to order.  ha! I cut the bee’s stripes off the bottom, traced his head for the body, and relocated his wings.  😉

Thought that a flower shaped card would be cute to attach him to.  And I couldn’t help pulling out the same DCWV Citrus papers again.  They’re just so bright and fun and work great with Kim’s images!

The text was printed onto a scrap of paper I had left from one of my previous projects.  It’s super easy…just print your text on regular printer paper.  Then attach your scrap of paper overtop of the text with removable adhesive and run it back through the printer a second time.  Easy peasy!

Tomorrow I will have another card I made with some different P.S. digis.  And this time I didn’t use the Citrus papers.  LOL.

This weekend we had a chance to sneak a few flowers in the ground and planters.  It’s so nice to have a day or two without rain!

I was inspired by our planting to come inside and create this card with a free digi image and sentiment by Kim Hughes.  Her images ooze with cuteness! The cute layout is from Kim’s Designer Drafts sketches #5 and I added some dots with a black pen across the top & bottom of the strips. I also applied Stickles to the bee’s wings…just a little something but it adds so much to the card.  And I used the new Spellbinders Grommet Tags for the sentiment.  So glad I purchased those! Last night I had fun playing with a “new-to-me” product from Letraset called Safmat.  It’s an adhesive-backed transparent film that you can print on with your computer.  Cool, huh?  All you need to do is print, peel off the paper backing, and apply it to your desired surface.  Easy!  The hardest part was thinking of what I wanted to create and designing it on my computer.  LOL.  Not really difficult, just took a bit of time.

I found this purse shaped tin in my stash that I bought quite some time ago at Hobby Lobby on clearance.  Then as I was searching through my files, I found a pic that was taken last year this time after the Spring-Fest stamping event in Buffalo, NY.  I’ll be heading to the same event later this month and I am so anxious to see these friends again that I only get to see once a year…so this pic was perfect! Once I created the photo, background, words, etc., the printing was simple.  I just changed the paper setting to A4 size and selected the Photo setting.  After printing, I trimmed it to fit with my paper trimmer, peeled the backing off and stuck it down.  I only had a few tiny air bubbles but I’m sure that was user error and should be better with practice.  I was able to press 99% of them out without difficulty.

Then I added some ribbon and trims with red-line tape and finished it off with a few Primas and a button.  Here’s a close up… The bottom of the tin is not perfectly flat…it bows down in the middle and made the tin “rocky”.  So I added some button “feet” to the base…now it sits perfect! Here’s a pic of the packaging if you would like to look for it.  You can buy it here on the Letraset site but I see it’s currently out of stock.  I do believe, though, that I read somewhere it will soon be available again.   Click here to see more ways to use the Safmat product.  I look forward to trying this again! Thanks for stopping by…have a great night!

fly a kite…or float in the pool

Today I have another card for the Dare To Get Dirty challenges.  This time I used October Afternoon’s Fly A Kite paper with C.C. Designs’ digi image, Pool Party Paula.  A sweet friend gave me this pad of paper as a thank you and I finally used it!  I ♥ it! Doesn’t the background paper remind you of the pattern on some pool liners?  ;0)

For this card, I played along with the challenge by Julie Warner (justwritedesigns).

I hope you are enjoying YOUR lazy days of summer!